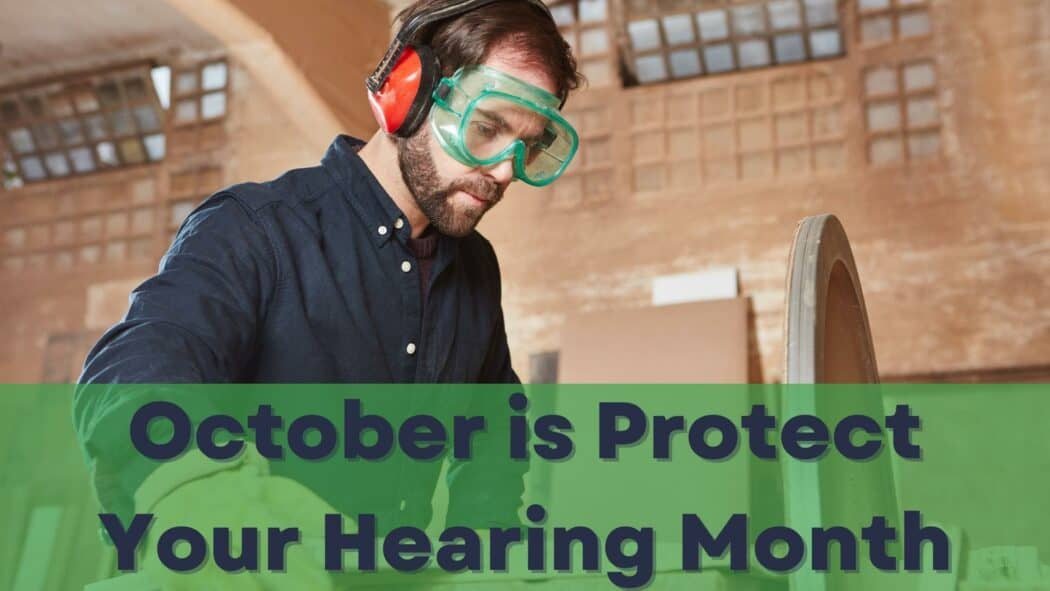 Do you suspect that there are noises in your daily life that could damage your hearing? It is common for people to put their hearing at risk and not even know it. If you’ve ever thought “it won’t hurt too much” when mowing the lawn without earplugs or spending all night in a noisy music club, think again! This October is National Protect Your Hearing Month, a national campaign designed to educate people around the dangers of noise to our ears.

What is Noise-Induced Hearing Loss?

Noise-induced hearing loss occurs when sound reaches levels high enough to damage the cells of the inner ear. Sound intensity is measured in decibels and once a sound reaches 85dB it can slowly start to erode hearing ability. This is because, past 85dB, sounds begin to produce enough vibration to shatter the hair-like cells, called stereocilia, as they hit against their membrane wall in the inner ear. Stereocilia convert sound information into electrical pulses, which are interpreted and comprehended by the brain. When they become damaged or destroyed, this causes diminished signals to the auditory cortex, and hearing is depleted.

When Is Sound Too Loud?

Clearly not all sound is bad, and while you may enjoy blasting the volume of your favorite song, which in turn may release endorphins bringing joy to the brain, it may impact your hearing in the future. A consistent exposure to 85dB can only start to damage your hearing after about 8 hours. However, as the decibels rise, the time it takes for sound to damage our ears, quickly decreases. For instance, at only a four decibel increase of 88dB, the same damage can occur in only 4 hours. This is because decibels are based on intensity instead of how we perceive a sound. A 10dB increase is perceived twice as loud. 100dB can damage your hearing in just 15 minutes, while at 110dB it only takes one minute!

Where is Your Hearing at Risk?!

Noise damage in the workplace is one of the most common sources of noise-induced hearing loss. The CDC reports that About 12% of the U.S. working population has hearing difficulty and approximately 24% of the hearing difficulty among U.S. workers is caused by occupational exposures. However, the CDC estimates that of the 40 million recorded with noise-induced hearing loss, only half have noisy jobs. This means that the workplace is not the only location where hearing is at risk. A siren can reach 100dB-140dB, depending on your proximity to it. If you live in a noisy location with lots of sirens, then this kind of damage can build up.

However, for a younger generation, one of the largest causes of hearing loss is the misuse of personal listening devices. These have been around since the end of the 70’s in the form of cassette player Walkmans and have evolved to be a popular method for listening to music while commuting, studying, working, or just having a private listening moment. What has progressed since the 80’s is unlimited streaming of media directly into the ears, creating a perfect storm of hearing damage for millennials and Gen Z. Headphones from Smartphones, iPods and other Mp3 players can produce sounds of 100-110dB easily for hours. Many people listen to personal listening devices to drown out other sounds, which causes us to unconsciously turn up the volume. This can damage the ears all too quickly.

When considering headphones, it is a good idea to limit the amount of time you listen. Make sure to keep the volume turned up no more than 60 percent of its volume potential, to avoid further damage. In other instances of hobbies, your commute, and your workplace, it’s a good idea to take a decibel reading. This can be achieved easily using a decibel reader available as a free app on most smartphones and computers. If you do detect a reading which exceeds 85 decibels, it’s a great idea to wear hearing protection whenever you are in this environment. Earplugs and protective headphones can lower the volume from 15-33dB which can make a big difference when you can’t just step away from the sound. To find out more about how to protect your hearing and if you have a hearing loss, use this October, as a call to action! Schedule a hearing test today and find out if you have a hearing issue that needs to be addressed.